Like many great things in the digital age, this story originated with an internet friendship. Sophia Demirtas, the founder of luxury womenswear label Fanm Mon, and I struck up a back-and-forth on Instagram in the early months of the pandemic, which is how I started to learn even more about a brand I had admired from afar. Really cool things like how committed Fanm Mon is to taking things slow in an industry where speed is encouraged, or how they employ artisans to preserve local craftsmanship in Turkey where the brand is based, or how they work to incorporate sustainable practices into everything they do and make.

My chats with Sophia eventually leapfrogged from Instagram DMs to Zoom calls and Whatsapp messages, where we began to discuss what it would look like to collaborate on something. I’m so excited to finally share the knitwear capsule of sweater and beanie sets that we designed together, which is now exclusively available to shop on Over The Moon. True to Fanm Mon’s ethos, each piece is 100% hand-knit and hand-embroidered by the artisans employed by their atelier, and will be made-to-order to reduce waste. Keep scrolling to read a conversation between Sophia and myself, where we share how the sausage—er, I mean sweaters!—were made.

Harling Ross Anton: I wanted to start by talking a little bit about something that makes the pieces in our collaboration so special, which is the time and hand work involved in creating them. You’ve shared a lot about this process with me, but for people who may not know, could you walk through the steps involved in producing Fanm Mon knitwear, starting with why you initially began making knits, to the process of sourcing the right yarn, to the knitting and embroidery itself?

Sophia Demirtas: I used to have a really hard time shopping for sweaters. The ones I liked aesthetically were usually too chunky to the point of being impractical — the kind of thing that would look nice if you wore it in a photo but that you’d want to take off immediately after. So, motivated by this personal challenge, I wanted to make knits that were in touch with how women dress in reality, something they could easily layer with, suited to wearing outside with a cute outfit or inside at home just to be cozy.

Once I decided to attempt that, I started looking for the right yarn. It was really, really difficult to find, because in Turkey where we’re based the yarns are mostly synthetic, and I wanted to use natural fibers. I went on a wild goose chase to find a company that would be willing to produce 100% cotton and 100% wool yarns for us. It took a lot of tries, a lot of convincing to be taken seriously since we’re a small company. Finally we were able to find the right partner who was willing to work with us. They previously produced yarn exclusively for baby clothes, so it’s all super high-quality. Once we started making our cardigans, I ended up gifting one to each of my employees, and they always tell me how often they’re stopped in the street by other women asking where they got the yarn for them. It’s something women really notice and appreciate here, because almost all of them, young and old, know how to knit. Altogether, we have 180 knitters working for Fanm Mon around Istanbul. They knit from home, so they can continue taking care of their kids while earning extra income at the same time.

It takes several weeks to make a single sweater, partly because all the knitting is done by hand, but also because every item goes through a lengthy inspection process to ensure that the length, the detailing, the structure is all made to our standards. If there is anything that wasn’t made perfectly, it has to be unraveled and re-knit. Then the second part is the embroidery, which adds additional time since we have only three women who specialize in that.

Harling: One of the reasons we decided to make the pieces in our collaboration with cream-colored yarn as a base is because you already had a surplus of that yarn, and so using that up was the more sustainable option versus buying all new yarn. You also have a made-to-order model for all of your clothing to reduce waste. Can you share what other ways your efforts to prioritize sustainability manifest in the day-to-day of running and designing for Fanm Mon?

Sophia: It’s so complex, the topic of sustainability in fashion. Especially when you’re the person running a brand, and you’re not only prioritizing it in the way the business operates but you’re also often educating both the people who work for the brand and the people who support, i.e. buy from, it. I think something that surprises people when they first start working for me is how fanatical I am about repurposing things, but I really try to lead by example, because I want it to be second nature for everyone on my team to be asking, “what else can we do with this?” And then as far as the pieces themselves, I’ll have conversations with our customers and explain that the occasional little knot on the inside of one of our knits doesn’t mean it’s flawed, or that it should have been tossed in the garbage, it just means a human being made it, and that’s actually what makes it special.

Harling: Right, that’s one of the things I love most about the knits you produce. It’s obvious they go through rigorous quality checks because there’s no way you’d be able to produce multiples of something in different consistent sizes without that, but each piece, even those in the same style, still feels somewhat distinctive. Like a fingerprint. You can genuinely tell it was made by people instead of machines.

I also wanted to talk with you about the behind-the-scenes process of designing the styles in our collaboration. The shapes of both the cardigan and the beanie were really important to both of us to get right, since this was the first time Fanm Mon was making a beanie and also a cardigan in this particular silhouette. We started by sharing reference images, basically. Silhouettes that we liked. And talking through what was possible or not possible based on existing patterns that you used. We wanted to keep rounds of sampling to a minimum, both to reduce waste and because each piece takes so much time to make. I think it’s a real testament to the skill of the knitters you work with that we only needed two rounds of sampling to get to the final design. The second sample ended up being perfect.

Sophia: Yes, I really love that you encouraged us to try a new silhouette for the sweater. I remember when I first saw a photo of you wearing the final sample and I was like, oh my God, it’s perfect. It’s a little more fitted than our signature cardigan style, but it’s not tight. It really hangs on the body beautifully.

Harling: I agree, the fit turned out incredible, I think because of the quality of the yarn, the cardigans almost mold to your body in a way. There’s also something about a coordinated set, a.k.a. a matching beanie and sweater, that’s particularly nice. I personally find it so hard to get dressed in the winter because it’s all about the logistical pursuit of staying warm, so having these cozy pieces that are not only warm but also deliver an instant feeling of elusive “put-togetherness” is a real two-for-one special. And come spring and summer, you can temporarily tuck the beanie away and style the sweaters with a casual cotton dress and sandals, or with a mid-length floral dress at a wedding where it gets a little chilly in the evening. Truly versatility at its finest.

Sophia: Yes, it’s so freaking cold here in Turkey, so I’ve been wearing the beanie and sweater together with pants, but I’m excited for it to warm up a bit because I want to style our cardigan with a dress I’m in the process of making now, which has this really fun poofy balloon skirt.

Harling: I can’t WAIT to see that. Is there anything else you think people should know about our collab, or that you want to share about the process behind it?

Sophia: Oh, I think, if there’s anything extra to share, it’s really the joy of the women making the pieces. As I mentioned before, our knitters work from the comfort of their home as they’re raising their kids or caring for an elderly parent. Some of them are older themselves, or have physical disabilities. Knowing that Fanm Mon is helping provide these women with an income and a platform for their amazing skill set… I think that’s what makes the whole hand-knitting part of the brand something that I’m really, really, really proud of. And I hope that as people see the pieces we collaborated on in person and experience them for themselves, or through someone they’ve gifted them to, they’ll understand that specialness even more.

This conversation has been edited and condensed for clarity. 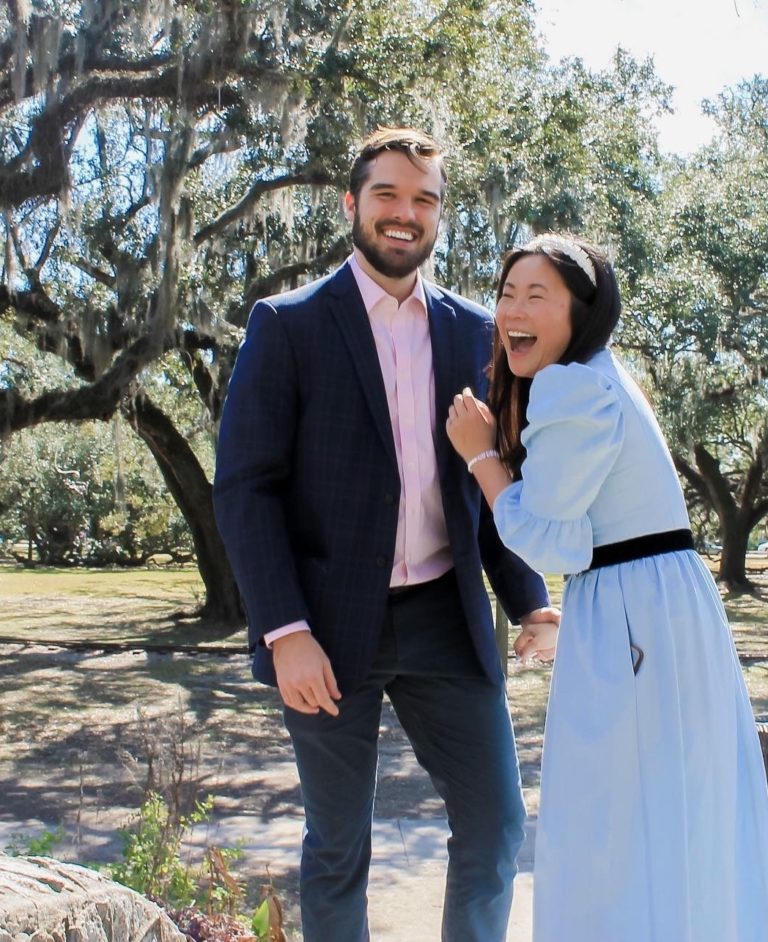 One Over The Moon Staffer’s Princess Diana-Worthy Proposal Story

Which Sex and the City Bride Are You?