When Jonathan Israeli first saw Samantha Bocelli at a friend’s BBQ in Brooklyn, he was instantly enchanted and tried to make a move. Samantha, however, was not interested in his flirtatious advances. Instead of being deterred, Jon wound up intrigued by the “nice” and “funny” girl he just met. He realized that if they couldn’t be something more, he would gladly accept her friendship…At least, that’s how the story goes. Sammie confesses that she “remembers none of this.” What she does recall, though, is that they were good friends for 12 years before upgrading their relationship status.

Almost three years of dating later,  Jon proposed on their first post-pandemic trip to the Lone Star State—complete with frozen margaritas and Texas-sized Tex-Mex meals. On their last night in Austin, they returned to the Airbnb and played a soulful record while sharing a beer on the back porch. Jon got down on both knees and asked Samantha to marry him. Knowing that Sammie, the wholesale director of Marla Aaron Jewelry, would likely have specific preferences for her engagement ring, Jon used a simple gold band with the intention of letting her design her own engagement ring at a later date.

Having been friends for more than a decade and dating each other for three years, neither Jon nor Sammie wanted to delay another moment without saying, “I do.” After their May 2021 proposal, they agreed on a June 2021 wedding date.

Both Jon and Sammie knew they wanted a civil ceremony that felt both intimate and modern. Their wedding would be a comfortable affair. Sammie’s hometown in Maryland was the perfect milieu. Its courthouse is gorgeous, not to mention the brilliant brick-paved streets that are lined with historical homes. Across the street from the courthouse is a small art gallery that would serve as the ultimate reception space. Samantha contacted the Gilchrist Gallery one week before the wedding, requesting their outdoor porch for the big day. From then on, Sammie served as her own de facto wedding planner.

Sammie’s wardrobe consists of an effortless black, white, and denim rotation, so she wanted her bridal look to contrast with her usual aesthetic. She turned to Sharon Tate’s wedding ensemble for inspiration, aspiring for a modern and joyful take on the civil ceremony outfit. Her smartly paired Marla Aaron Jewelry was her “something borrowed” and a chic homage to her work team.

On June 18, 2021, Jon and Sammie got ready for the wedding side-by-side with a bottle of champagne. They left the bed and breakfast inn together and met the country clerk outside of the courthouse. With their parents’ cheers and buoyant glee, they were married in a “short but sweet” ceremony. While the newlyweds took photos, cars passed by and honked to congratulate them. Sammie confides that “it just felt like a ‘finally’ moment combined with an ‘I-can’t-believe-we-pulled-off-this-most-perfect-day’ moment!”

The two joined their guests outside of the art gallery across the street for music, a cheese board, and Aperol Spritzes. The delicate china was actually from Sammie’s great-grandmother’s personal collection. While patrons of the gallery were inside, perusing the opening night of a local artist’s work, Jon and Sammie were sipping and dancing to an assortment of Steely Dan and Fleetwood Mac.

While everyone else left for dinner, Jon and Sammie stayed on the porch and finished their drinks, as the dusk settled over the evening. The couple kept dancing, snapping pictures, and laughing all night long before taking their parents to a local Italian restaurant. They escorted their family back home and ended this magical night with beer by the local river. 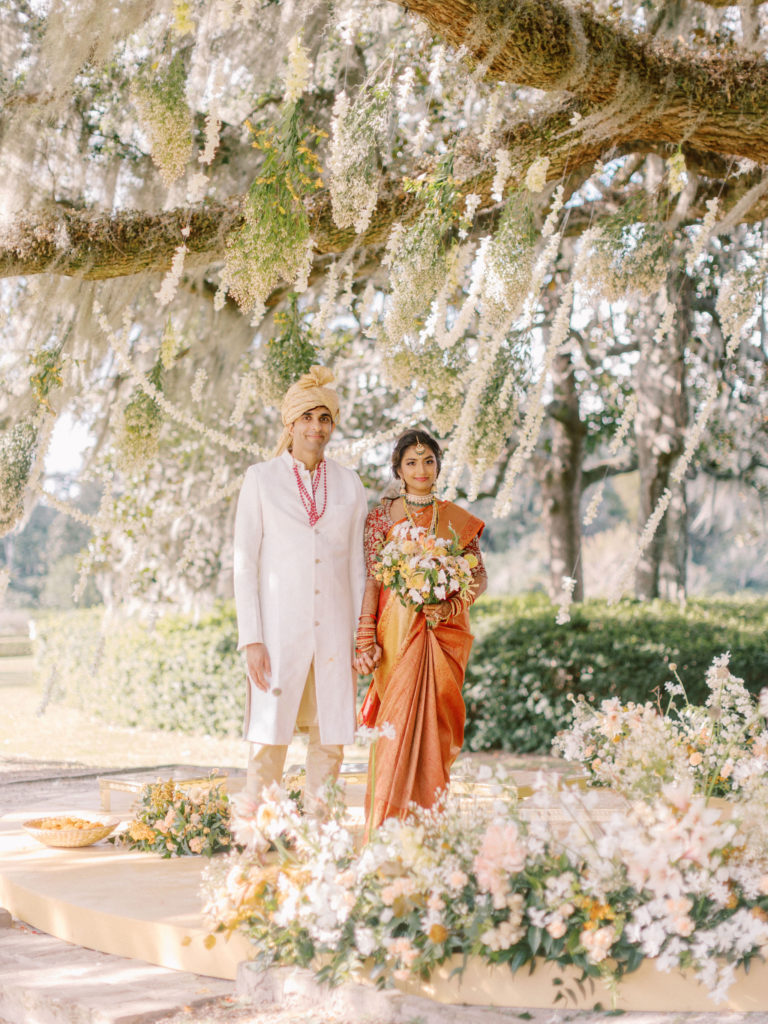