Oh, the excitement of a wedding in the Downton Abbey family! You can practically feel Carson’s eager anticipation at the mere mention of impending nuptials for any of Lord Grantham’s daughters. Over the years, we’ve had our fair share of fairytale weddings at Highclere Castle, and the bridal looks always lived up to our expectations. Because if there’s something you know about the Julian Fellows created PBS series, it’s that every last detail is orchestrated and drama awaits. Lucky for us, the pomp and the circumstance is again coming back in film form! In celebration of the news that the film Downton Abbey: A New Era will be released in March 2022, we’re looking back at some of the beautiful bridal ensembles created by Emmy nominated costume designer Anna Robbins. Each bride fully owns her own look, so we ask, which Downton bride are you? (Warning: spoilers ahead.) The most stylish, cutting-edge, and shall we say the sassiest of the sisters, Lady Mary is every bit the future lady of the house. Classic in her color blocked dresses, yet bold enough to shock everyone with her 1920s style bob, including Granny, who claimed to confuse her for a man wearing her clothes, (you can always count on the Dowager Countess for those quick, witty one-liners . . . love her!) In her first wedding to Matthew Crawley, Lady Mary was every bit the elegant bride in her crème lace gown, which featured delicate, rice pearls and Swarovski crystals, and was the show’s most expensive look to date. Her 45-carat floral diamond tiara, which was made by U.K. jeweler Bentley & Skinner, was the perfect addition to her almost-fairytale ending. For her second bridal look to the dashing Henry Talbot, she sported a more modern ivory silk day dress and pearls, complete with a matching hat, fitting for the wife of a racer. The youngest Crawley sister was a fierce leader in every way, pioneering for women’s rights and the first to get involved in the war effort. So her romance with the family chauffer, Thomas Branson, wasn’t entirely a shock, even though it brought its fair share of drama. While the couple initially planned to elope, they ultimately married while she was with child in a small ceremony that happened offscreen and then quietly moved to Ireland. Sybil still makes our list as she sported the most iconic costume of the entire series, a gorgeous beaded Paul Poiret-inspired harem style look that she, of course, proudly flaunted in front of the family, with a smirking Branson peering on. A career woman and a single mother, Lady Edith is the feminist heroine we needed in the show. Always considered the frumpier second sister, and unable to compete with Mary, she thought she finally found her happiness when she was set to marry her (much older) suitor, Sir Anthony Strallan, and wowed the audiences as a glowing young bride in her elegant draped silk dress. Her something borrowed, was the heirloom family tiara, which Mary wore in her first, also ill-fated wedding. Her second wedding to Bertie Pelham was truly the fairytale ending she deserved, as she became Marchioness of Hexham, a position that outranked everyone else in her entire family. Her wedding dress began with a vintage 1920s Brussels lace train, and it took 9 months to find matching fabric to build out the dress. Even her beaded headpiece showed the newly strong and confident woman she had become, and which look forward to seeing more of in the film. Outspoken, frivolous and fun, she brought life (and modernity) into the house. Her style is the most youthful of all the women, and her wedding to Atticus Aldridge was just as lovely as we could have hoped for. Her reception gown reflects her flapper style, featuring dainty gold sequins, and styled with matching gloves and a spectacular pearl and floral headpiece. The most surprising part of the whole look is that Robbins spotted the unworn 1920s dress in a vintage shop on the famed, Portobello Road. Perhaps engaged Rose fans should take heed and head there for some shopping! 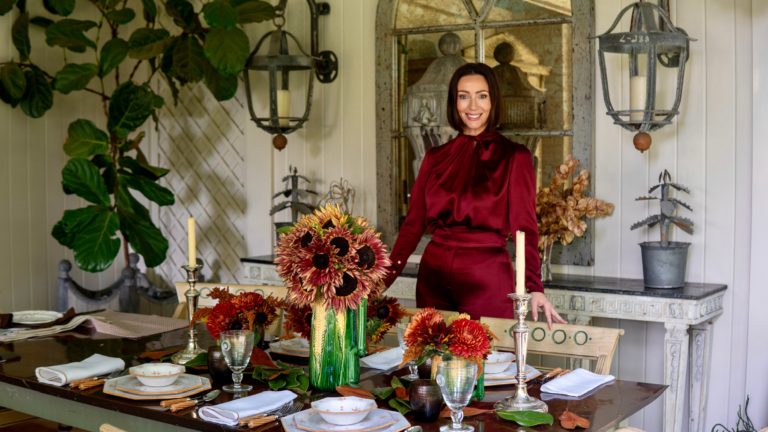