Jodie Chan and Jonathan Sebbane‘s first meeting was “quite accidental,” as Jodie confesses. They were chatting at an industry event in New York City, hit it off, and continued the night with drinks at the Andaz Bryant Park and dinner at the Bowery Hotel’s Gemma. They began dating, and while on a trip with Jodie’s parents in Tokyo, Jonathan proposed in the lobby of the Aman Tokyo. He originally wanted to pop the question on the grounds of the Imperial Gardens, but his plans were sidetracked. Jodie laughs, though, noting, “I guess all our important milestones happen at hotels!”

Jodie and Jonathan work in fields that already require plenty of orchestration, organization, and attention to detail; so when it came to their wedding day, they wanted something simple and stress-free. The couple divided the celebrations into two parts: their City Hall ceremony in New York City and an intimate family lunch at the Château La Coste in Aix-en-Provence in the South of France where Jonathan is from. They hadn’t even given serious thought to the logistics until two weeks before their wedding date. “I didn’t want to overthink it,” Jodie confesses. The only detail they knew for certain was that an intimate coterie of their family and friends and beloved puppy Alfie would be in attendance.

Lowkey and effortless, Jodie did not need to devote too much thought to what she should wear. She liked the idea of a simple, tailored suit for her bridal ensemble; so she wore a custom white Altuzarra suit and matching heels. She saw a dazzling pair of CELINE earrings on the runway and knew they were meant to be her “something blue.” Her groom selected the ultimate engagement ring, a Stephanie Windsor sparkler, for her at the dearly departed Barneys New York. “I’m so proud that he navigated the process without my input whatsoever, but when I saw the ring I knew it was perfectly me, and perfectly him,” she says. Jodie enjoys designing floral arrangements in her free time, so the night before the wedding, she interspersed peonies and sweetpeas into her very own bridal bouquet.

Jonathan, a lifelong fan of Paul Smith, had to wear one of the designer’s suits for his wedding day. He slipped on shoes by Yves Saint Laurent.

On February 24th, 2017, Jodie and Jonathan exchanged I do’s and Cartier bands in the New York City Marriage Bureau city clerk’s office. Their loved ones appointed themselves to the unofficial “Confetti Committee” and showered the bride and groom with confetti. Afterward, the couple took advantage of the picturesque day and ventured to Washington Square Park for a few photos underneath the unseasonably warm sun. They then toasted their nuptials at ABC Kitchen. “We still go every year on February 24th to mark our anniversary,” Jodie shares. “Their Chocolate Marshmallow layer cake is our de facto wedding cake.” 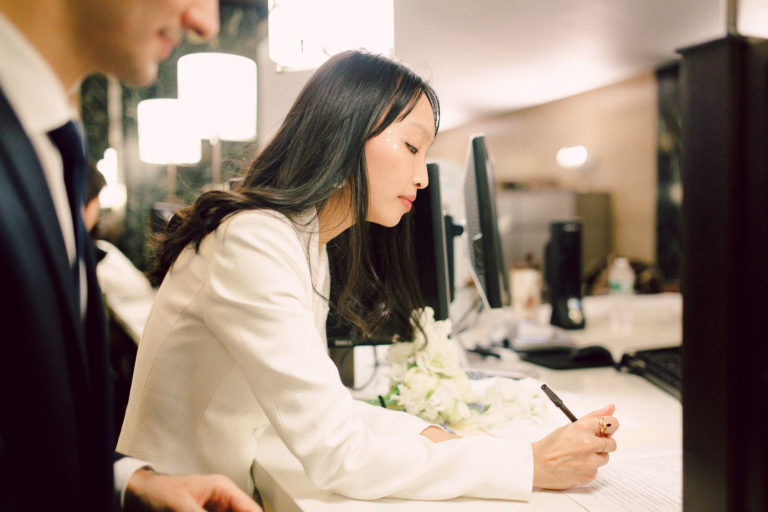