After around six years together, Thomas Moore proposed to influencer Stephanie Ledda at Lake Placid. “I was making Tommy take a photo of me for Instagram—lol. I was just focused on getting ‘the shot,’ when he kept trying to tell me something was missing,” Stephanie remembers. “I was completely oblivious, until he pulled out a box and got down on one knee.”

Once engaged, the two decided to host their destination wedding somewhere they’d been to before and landed on the Dominican Republic. Their planner, Mahla of The Eventeur, recommended Casa de Campo as their venue, and they excitedly booked it for their March nuptials.

To walk down the aisle, Stephanie chose the Magia gown by Galia Lahav, which she found at Bridal Reflections, and decided to customize the back for a truly one-of-a-kind look. On the day-of, the beauty influencer, of course, did her own glam perfectly, as bridesmaids were looked after by makeup artist Cary Michelle Flaz. Later on in the night, the bride changed into a strapless, sleek dress by another Israeli designer, Dana Harel. The matron of honor complemented her well in a simple blush halter dress with rhinestone detailing by Mac Duggal.

On March 3, 2022, at Dye Fore in Altos de Chavon, the bride walked down the floral-lined, cobblestone aisle and stood under an arch of greenery and white flowers with Tommy. “I loved that it didn’t have a beach-y vibe, which is usually the case for weddings in the Caribbean,” Stephanie says of the ceremony setting. As for the service itself, she recalls, “I feel like it was a bit of a blur, I remember laughing and smiling walking down the aisle, when I saw Tommy, and then tearing up when my dad gave me a hug at the end.”

After being announced as a married couple, everyone moved to the tented space with views of the blue waters. A delicious reception dinner was followed by the chocolate wedding cake.

“My dad gave probably the longest speech ever and told every story under the sun, but it was so funny and heartfelt,” Stephanie shares. “I’m his only daughter, so I knew how much it meant to him to be able to do that.” Then the newlyweds had their first dance to “In Case You Didn’t Know” by Brett Young.

The bride’s favorite part of the evening was the dancing with DJ Kambax. “I changed into my second dress and was able to get low,” she laughs. To fuel the party through the night, pizzas were passed around.

Once the festivities came to a formal close, the groom decided to play a prank on his friends. Since it was so hot in the Caribbean, the boys wanted to go into the pool, and Tommy supplied his friends with—wait for it—dissolving swim trunks. “It was probably one of the funniest things we’ve ever seen,” Stephanie remembers. “All the guys realized their shorts were falling off.” You could say they partied their pants off. 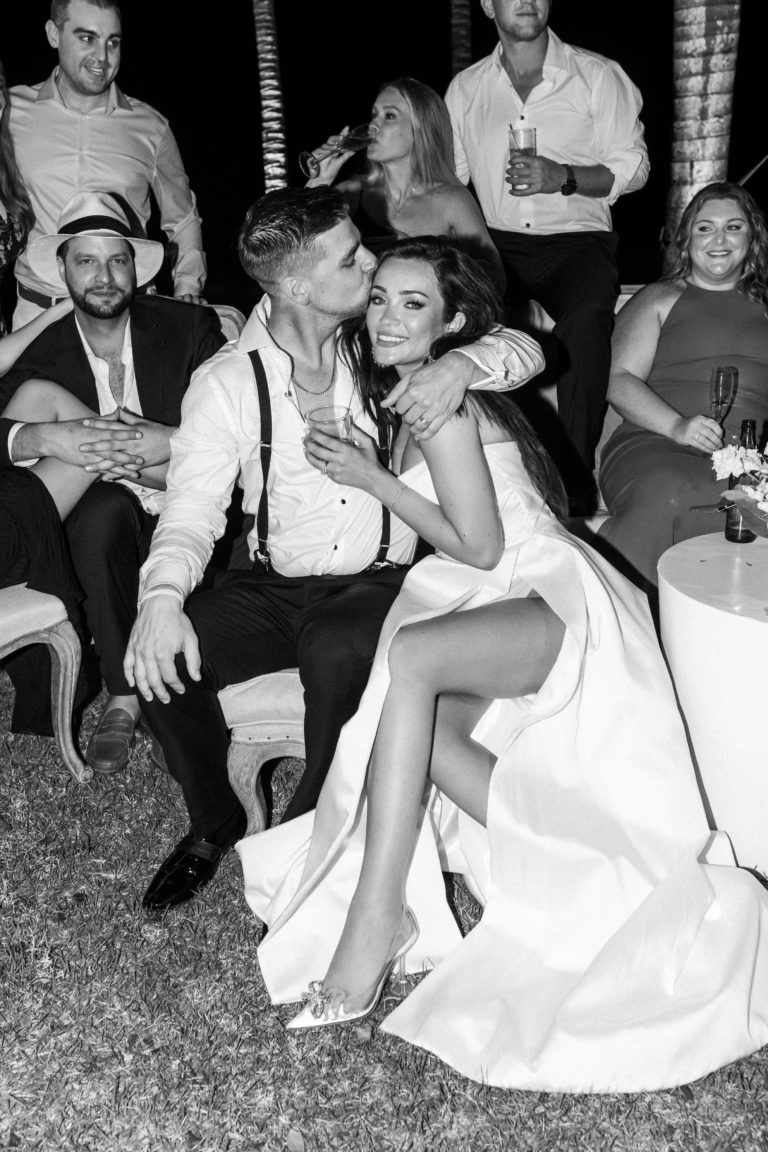