When Gossip Girl, the addictive CW series about a group of über fashionable private school New Yorkers, premiered on TV in 2007, nobody could have ever imagined the lasting impact it would leave behind. After all, the show not only launched Blake Lively’s career, and brought us one of the most iconic couples on screen (Chuck and Blair forever people), it also easily became the most fashionable hour on television. Throughout its five year run, the teen soap featured plenty of memorable sartorial highlights—all those galas and parties meant there was a lot of dressing up—but the biggest fashion moments always took place during the many, many weddings. (We’re looking at you, Lily Van Der Woodson!) Now with a reboot of the show on the horizon (HBO has just ordered 10 episodes for its upcoming HBO Max streaming platform), we couldn’t help but look back at the show’s most iconic wedding moments. Which one’s our favorite, you ask? Now, that’s a secret we’ll never tell! XOXO Lily van der Woodsen and Rufus Humphrey tied the knot in a Brooklyn loft ceremony, where she wore a crimson ruffled dress with turquoise earrings—an unexpected, but thoughtfully put together look that stands the test of time. Lily van der Woodsen’s wedding to Bart Bass was the classic event we needed and longed to see after that small Brooklyn affair—I mean we deserved to see her in white, or even off-white. She walked down the aisle in a strapless, A-line gown, and Serena stole the show in a ruffled, high-collar floral Ralph Lauren bridesmaid dress. 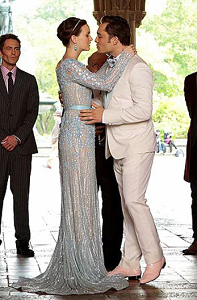 Oh, the rushed wedding by Bethesda Fountain, where Blair Waldorf said I do to Chuck Bass in that sparkling long sleeve belted blue Elie Saab dress, paired with a thin headband (she’s still Blair Waldorf, after all) and blue-green earrings. It was almost a perfect moment—before the cops came, but with these two, nothing could ever have been ordinary.

Lonely boy finally married Serena van der Woodsen—and all is right with the Gossip Girl universe. She wore a stunning metallic gold strapless gown by Georges Chakra Couture, and we are all here for this staircase entrance . . . and Chuck and Blair’s adorable son Henry. Blair Waldorf’s mother, Eleanor, marries the sweetest man, Cyrus Rose, in a Jewish ceremony, while wearing her own design—of course. That summer Blair Waldorf met a prince in Paris, we all knew something dramatic was going to come out of it, but no one could’ve predicted the disaster that was their wedding—although everyone still looked amazing at the ceremony. Blair wore custom Vera Wang to say, “I do,” and then bolt a la Runaway Bride. Like we said Chuck and Blaire forever! Which Sex and the City Bride Are You?