Here comes the bride—and her celebrity bridesmaid! No amount of fame will absolve a good friend from wedding party duties. Regardless of how many Oscar nominations an actress has or sold-out shows a singer performs, they’re never too busy to serve as a loved one’s bridesmaid. In fact, it may be their most important role yet. Here is a star-studded list of celebrities who stepped out of the spotlight long enough to let the bride be the center of attention.

Ivy Getty’s fantastical San Francisco wedding boasted a guest list that included Vogue‘s Hamish Bowles and pop singer Olivia Rodrigo. Every turn at the altar featured public figures—former speaker of the House of Representatives Nancy Pelosi officiated the ceremony, while California Governor Gavin Newsom and San Francisco Mayor London Breed watched from the aisles. But the maid of honor, actress Anya Taylor-Joy, stole the show in a custom John Galliano gown. The ethereal, silvery bias-cut dress provided ample swaying for when she led the bridal party in a breakout dance to “Miracles Happen” from The Princess Diaries.

On the morning of her Miami wedding, Lauren Perez got ready alongside her best friends like Kendall Jenner, Jessie Jo Stark, and Bella Hadid. The coterie of bridesmaids donned Australian Bec + Bridge bias-cut gowns in a unique shade of sea spray blue. The wedding party was not the only star-studded group at the oceanside nuptials. Hailey Bieber also attended the wedding in a coppery Magda Butrym gown with bronze embellishments.

A post shared by Kate, Duchess of Cambridge (@familycambridge)

It’s been over a decade, and the image of Pippa Middleton in her floor-length Sarah Burton for Alexander McQueen gown is still etched into our collective conscious memory. Royal wedding watchers gasped at the non-traditional white color choice and gaped in awe over the form-fitting silhouette.

Beyoncé’s sister, Solange Knowles, requested guests subvert tradition and join her in wearing white to her New Orleans nuptials. Beyoncé sported a Torn by Ronny Kobo eggshell dress. When Solange broke into hives after the Second Line revelry, Beyoncé brought the bride back to the hotel for a quick dose of Benadryl and cortisol cream. Beyoncé also served as a bridesmaid in white at her mother’s wedding in 2015.

Celebrity stylist Micaela Erlanger spent years getting client turned close friend Lupita Nyong’o red-carpet-ready. When Erlanger married Mac Osborne at the Vizcaya Museum and Gardens, Nyong’o returned the favor and stood by Erlanger’s side in an impeccably selected bridesmaid gown. The stylish bride gifted her girls their very own De Beers Forevermark earrings and custom clutches from the Bella Rosa Collection. Many of the custom Jennifer Behr pieces that Nyong’o and her fellow attendants wore inspired Erlanger and Behr to release a limited capsule collection of bridal—and beyond—accessories.

The American-British actress was publicist Tori Cook’s “Mate of Honor” at Cook’s effortlessly elegant nuptials in England. Assisting the bride runs in the family—Sienna Miller’s sister, Savannah, designed a bespoke wedding outfit and bohemian cape for Cook. Then, in December 2022, it was Savannah’s turn to walk down the aisle and marry James Whewell in London. Sienna was a bridesmaid once more and wore wintry blue velvet with a proper jacket and glamorous platform heels to the ceremony.

In 2015, the supermodel designed her own limited edition fit-and-flare dress as part of a collaboration with Christy Dawn. When her close friend asked her to be a bridesmaid, Emily Ratajkowski had the perfect reason to wear the fluted sleeve number.

The Victoria’s Secret supermodel wore a white eyelet dress with a bohemian flower crown to her brother’s wedding in Hunter Valley. Matty Kerr exchanged vows with restauranteur James Wright in 2016, one year before same-sex marriages were legalized in Australia.

Taylor Swift is a masterful songwriter and, judging by the many weddings she has attended as a bridesmaid, a great friend. She wore Reem Acra to a childhood best friend’s Nashville nuptials and delivered a thoughtful 11-minute maid of honor speech. Without reciting the whole encomium, here’s one stellar line: “My favorite accomplishment of my entire life is that everything in my life has changed except for me and Britany.” Swift reprised her role as bridesmaid and attended the wedding of her friend Abigail Anderson, who was the inspiration for Swift’s song “Fifteen,” and her friend Lena Dunham’s wedding. One question remains. Did Swift usurp the DJ’s mic and sing for any of the newlyweds?

Before the Girls writer and star married Luis Felber in 2021, she was the bridesmaid for her best friend, Audrey Gelman. The elevated casual bridesmaid uniform consisted of a light pink sweater and a sequined J. Crew skirt. Upon closer inspection, the skirt features customized details for each bridesmaid. Some chose initial embroidery, while others picked cheeky decals.

Emma Roberts served as a co-maid of honor at designer Kara Smith’s wedding in 2015. Roberts split her duties with Smith’s co-designer, Brit Elkin. All of the bridesmaids wore dresses from Smith and Elkin’s line, ELKIN.

Shortly before Sofia Vergara married Joe Manganiello, the Modern Family star dazzled in a floor-length buttercup yellow gown at her friend’s wedding in 2015.

The Hilton girls prove that sisters make the best bridesmaids. Paris Hilton wore a Cinderella blue dress to Nicky Hilton Rothschild’s London nuptials in 2015. The royal color was a fitting choice, considering that the ceremony venue was Kensington Palace. Just a few years later in 2021, Rothschild donned a light rose pink Alice + Olivia gown to Hilton’s wedding in Bel-Air. From the high neckline to the tight bandeau cinched by a satin bow, this bridesmaid dress was exquisite.

When it was Eva Longoria’s turn to walk down the aisle, she enlisted her best friend Victoria Beckham for more than just bridesmaid duties. Longoria also asked the designer to create her wedding gown, and Beckham made a rare exception to her no-wedding-dress policy. The bride has nothing but praise for her bridesmaid, sharing, “Victoria was one of my witnesses, too . . . so it was a Victoria Beckham weekend. She was the best, sweetest person to have there on this day.”

Try to find a cooler bridesmaid than Rihanna in a lilac Badgley Mischka tulle gown. Go on, try. At her assistant’s 2015 Hawaii nuptials, the singer joined the bridal party for a laidback photo on the beach.

For her brother’s Scottish wedding, the Pirates of the Caribbean and Pride & Prejudice actress stood by the bride’s side in an aubergine-color frock and black heels.

While it’s difficult to ever imagine telling Lady Gaga what to wear, Lady Gaga’s best friend found herself in that position when she asked the artist to be her bridesmaid. The Grammy Award-winning singer donned a muted lilac gown for the New Orleans nuptials. She also attended a high school friend’s wedding in Cabo San Lucas, where she opted out of her usual Tiffany & Co. diamonds to wear a matching bridesmaid dress in blush.

Selena Gomez was the maid of honor at her cousin Priscilla DeLeon’s wedding. When Gomez wasn’t recording or shooting, she attended the gown fittings. The bridal party looked classic and sultry in black gowns with high slits and contrasting neutral-color bouquets. In her heartfelt speech at the reception, Gomez shared that DeLeon “taught [her] to be strong.”

Margot Robbie knows her way around the role of bridesmaid. Just five months after tying the knot with Tom Ackerley, Robbie wore white again—this time as the bridesmaid for a friend’s Hawaii nuptials. Several years later, the actress flew Down Under to wear a slinky Bec + Bridge gown and join her friend’s wedding processional.

Before everyone poured over her South Carolina wedding, Hailey Bieber served as the maid of honor at her sister Alaia’s wedding to Andrew Waronow in Turks and Caicos. Alaia Baldwin would later be a bridesmaid all dressed in satin pink at Bieber’s nuptials in 2019.

In 2007, Mary-Kate and Ashley Olsen first began their bridesmaid career at a friend’s wedding in Cabo. Years later, the twins joined the 18-person bridal party to celebrate their friend, Cassie Coane.

When The High School Musical cast sang “We’re All in This Together,” they meant it. Vanessa Hudgens was a bridesmaid at co-star Ashley Tisdale’s wedding and admitted to tearing up when she saw Tisdale in her stunning Monique Lhuillier gown. In 2022, Hudgens was a bridesmaid once more—this time for Sarah Hyland. Hudgens told PEOPLE that she brought “vibes” to the bridal party, in addition to bachelorette trip necessities like bathing suits and sound bath meditation.

Actress Nina Dobrev was a bridesmaid at Julianne Hough’s wedding on Lake Coeur d’Alene in July 2017. In one of Dobrev’s Instagram posts from the day, she declared that the event was “the most fun wedding” she has ever attended. The dance floor was, unsurprisingly, the event’s centerpiece. Dancing with the Stars legends glided over the antique glass floor all night long.

When Cara Delevingne’s sister, Poppy, married James Cook in 2014, the model could have been mistaken for the bride. Both sisters were all dressed in white for the big day in London. Ahead of the nuptials, the two sisters celebrated Poppy’s hen at Coachella with Sienna Miller.

The comedian was all smiles in a strapless blush gown at her friend’s wedding in Rome, Italy. She captioned her Instagram post with a pithy congratulations to the couple and stated she was “very proud” to be a bridesmaid that day.

While we saw Sarah Jessica Parker in her fair share of attention-grabbing outfits on Sex and the City, she wore an understated purple dress to her former assistant’s wedding in August 2014. The bride stood out in her floral-print wedding gown. Carrie Bradshaw would certainly approve.

The Victoria’s Secret supermodel proudly served as a bridesmaid at Ana Beatriz Barros’s wedding in Greece. Ambrosio wished the couple “all the happiness in the world” in an Instagram post and wrote to Barros, “I’m so happy to be by your side at the most beautiful and loving time of your life!”

Drew Barrymore side-stepped the typical age requirement and served as the flower girl at Ross Mathews and Dr. Wellinthon García’s wedding in Mexico. Mathews credits Barrymore with both the destination suggestion and the flower girl idea. He recalls the conversation, sharing, “One day we were doing a story about weddings, and [Barrymore] asked me, ‘Are you going to have a flower girl at the wedding?’ And I’m like, ‘Why? You want the gig?’ She goes, ‘Are you serious?’ I’m like, ‘Are you serious?’ And she’s like, ‘I’m so serious.’ So she’s our flower girl!” This Couple Said, “I Do,” in The Same Church on Cape Cod Where The Bride’s Parents Wed Years Prior 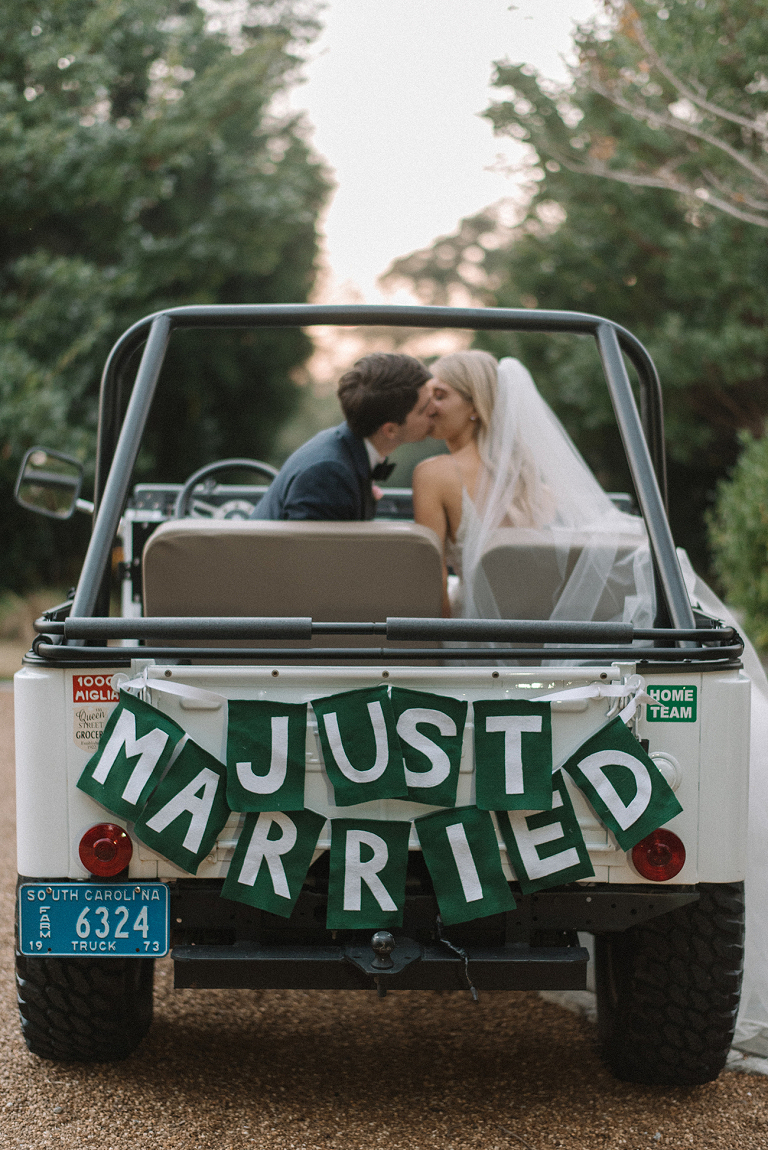 12 Ways to Make an Epic Wedding Exit, Inspired By OTM Brides and Grooms

Miracles Happen! Here’s Everything We Know About The Princess Diaries 3 Film