“Harry [Kargman] and I were set up on a blind date by our grandmothers who played bridge together for 50 years,” laughs Jill Kargman, the writer, producer, and star of Bravo’s hit scripted reality show Odd Mom Out, which is in the midst of its third season and the best thing on TV right now as far as we’re concerned. “Before I met Harry, another friend of my grandmother’s had a grandson named Adam, and she wanted to set me up with him. I actually called off an engagement and went on a blind date with him. I got all ready, and I got my hair done, and I was so excited and I get there and this gorgeous guy was like ‘Jill?’ and I said ‘Yea, hi! Are you Adam?’ and he said ‘I’m totally gay but my grandmother would drop dead if she knew.’” And, that was that.

Two years later, Jill met Harry’s grandmother.“She was like ‘I want to fix you up with my grandson.’” Needless to say, Jill was skeptical, but her grandmother’s friend insisted her grandson was straight and would make a good potential suitor.

Eventually, Harry called. “He opened the conversation with ‘I heard about your last grandmother fix-up, but I am definitely a hetero, and I want to take you out,’ and we kind of laughed. He was so awesome; we really hit it off and talked for four hours on the phone. He asked me out to dinner the next night, which was a Saturday.”

In a scene that could have been straight out of Sex and the City, all of Jill’s friends were adamant about her not giving him “a Saturday.” “They said, ‘What, are you crazy?!’” Jill remembers. “He’s a Wednesday safety drink!” She told them she would go meet him and then meet up with friends later, but she never did. The next morning they all gathered for their usual girls’ brunch. Jill walked in and said,“I met my husband last night!”

Two years later, Harry proposed. “We were in L.A. when 9/11 happened,” Jill remembers. “I was freaking out, especially as a New Yorker, and was really emotional. After we finally got back to the city, we went to Wheatleigh in the Berkshires for a weekend. We were hanging out, and apparently, he was going to ask me to marry him in this beautiful dining room that was all glass. He was planning to do it there with dessert. But, I was like I am so cold, it’s freezing, can we just go up to the room and order dessert up there? I am glad it worked out that way. They sent up the dessert, and it said ‘Will you marry me?’ on it. I love chocolate so it was written in chocolate. He was like ‘Here’s the dessert!,’ and I didn’t notice at first. And then he was smiling, and I started freaking out.”

Harry didn’t propose with the ring though. “I forget if he had a plastic something like a lollipop—I can’t remember,” admits Jill.“But he was on one knee and all that.” Later, Jill told him that she liked emerald diamonds and that she didn’t want any side stones. “He did a great job—it’s actually not emerald cut, it’s radiant, it’s a rectangle—it looks like a coffin. I love it, and I wear it all the time. I take it off when I’m shooting though . . . I think it’s a little too flashy for the show. So, I put it in my mom’s safe for four months and then I put it back on, and it’s very exciting again.” Jill and Harry set a date for April 27, 2002. “It was after 9/11, and the United States was going to war, so I just wanted something quiet and intimate. I had been engaged before, and we had booked a venue and were going to have 430 people. I knew I didn’t want that—that’s not really me, so we got married at the Century Association, a club on 43rd Street between 5th and 6th Avenue. It’s a townhouse, and they have a library on the top floor. It’s all mahogany, and I’ve always been enamored by that room. I just thought it would be so us and so perfect—it was really intimate and beautiful and kind of gothic and dark.” Jill’s father, Arie Kopelman, was the COO of Chanel at the time, and as a result, she got to live out pretty much every girl’s dream and wear a wedding dress designed by Karl Lagerfeld, just for her. “I really didn’t have that movie montage moment of trying on dresses though,” she notes. “I never tried on a single dress, so it was a little weird, but I worship him and knew he would do something awesome. I told him I wanted long sleeves, and I knew he wasn’t going to send something that wasn’t my style. But people would ask: ‘What does your dress look like?’and it was three months before the wedding and I didn’t know.”

Without a finished dress a few months before the wedding, Jill was nervous, but she had faith. “He’s a genius, like the most brilliant person in the whole world, so I knew I was in good hands,” she says. “But I also was like ‘What’s it going to look like?’ And then Vogue actually photographed it. André [Leon Talley] met me to look at it and was like,‘Is this the final one?’, and I said that it was. It didn’t look like a beaded couture gown. It probably looked more like ready to wear. It wasn’t though. I’m just a basic bitch, so I did not want embroidery and beading and all that. I love it—it’s in a Chanel casket in my parents’ basement now.” Jill’s seven bridesmaids all wore strapless corset-like tops and chocolate brown long silk skirts by Shoshanna. Meanwhile, Harry was in black tie. 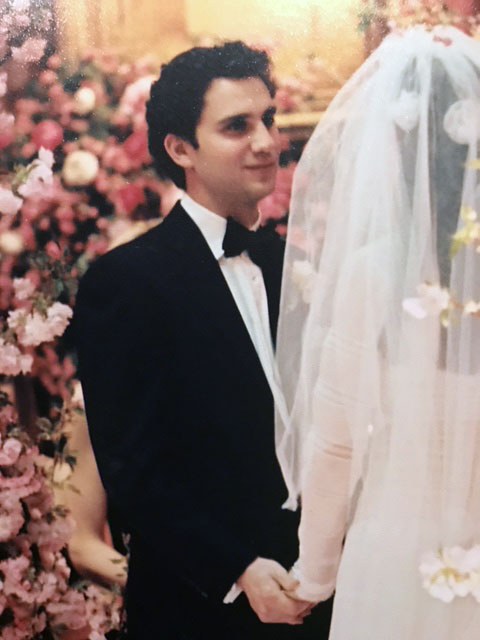 The couple had a fully traditional Jewish ceremony, but there were certain aspects they decided to skip. “We’re pretty reformed so we did this one thing where you walk around each other seven times,” explains Jill. “It is saying I am building my walls around you. It was romantic and then you break the glass at the end. It was really great—short and sweet.” Everyone in the audience threw pale pink flower petals as the newlyweds recessed down the aisle. At the reception, there were peonies and cherry blossoms everywhere and caviar galore. “We figured since it was intimate and small, we could make it awesome,” says Jill. “There were also these gigantic scallop shells too. My mom and I had been in Paris for my dress fitting, and there was a seafood restaurant we went to that had the most beautiful scallops. The were gigantic! I have never seen shells this size on American beaches—they were as big as a plate! Anyway, they were throwing them out, and my mom was like we are going to go totally renegade and ask the maître d’ if we can have them at the end of the night. He said ‘bien sur.’ He thought we were crazy, but we took back 150 giant shells from the restaurant. We served them on the plate with the caviar at my wedding, and they looked so beautiful and sculptural.” When it came to choosing the after-dinner entertainment, a wedding band was never an option. “I really get douche chills,” admits Jill. “I have a personal phobia. It’s not anyone’s fault but my own—it’s like my fear of clowns. I can’t deal with wedding bands because I think their interpretation of stuff is really cheap, and I have a really sensitive cheese-0-meter, so I opted for a DJ.”

Jill and Harry took their first spin on the dance floor to “I Believe” by Stevie Wonder. And then, once the dinner and the dancing were over, the newlyweds went back to their room at the St. Regis. “It’s funny—I got this entry-level room the night before [our wedding] because we spent Friday night separately after the rehearsal dinner,” remembers Jill. “And, I heard a scratching in the wall, and I think it has to be rodentia. I was alone. My best friends Trip and Vanessa had just tucked me in. Anyway, I called downstairs and was like ‘I’m so not a bridezilla, but I’m getting married tomorrow and there’s a scratching noise, and I can’t sleep if there’s a rat in here.’ So the guy comes up, and of course, he doesn’t hear it at first, but then he hears it. He picks up the phone and says, ‘We have a code 9!’ The next thing I know I have three guys carrying my dress like a dead body, one guy was carrying my suitcase, and I’m in my St. Regis’ bathrobe going up to the sickest penthouse suite that I never could have afforded. They were like it’s empty—it’s yours for the weekend.” Jill’s parents got married at the St. Regis in 1971 so despite the pre-wedding drama she was happy to have a piece of their history incorporated into her own weekend even though she wasn’t into going the big ballroom reception route herself. “Anyway, Harry and I went back to the crazy upgrade,” remembers Jill. “It was like the Michael Jackson suite overlooking the park. We had sex because I felt like you’re supposed to. Then he fell asleep, and I watched Gladiator with Russell Crowe. I wrote an essay about it in my book Sprinkle Glitter On My Grave. He passed right out, but I was running on adrenaline. First, I walked into the crazy huge guest office room, and I took St. Regis stationery and wrote my parents a thank you note. It said even though ‘I’m a Kargman now, but I’ll always be a Kopelman.’ Then I watched more Gladiator and fell asleep at like 4:00 A.M.”

The day after their wedding, the newlyweds took off for their honeymoon in Italy. “I had never been to Venice, so we went there,” says Jill. “We rented a car and just drove through Italy for two weeks. We started in Venice and ended in Rome. I was crying when we came back to New York because ‘the honeymoon was over,’ and I remember Harry saying: ‘The honeymoon will never be over!’” Earlier this summer, for their 15th wedding anniversary, they went on vacation and repeated the itinerary. “All three of our kids were at camp,” says Jill. “And, we did almost the same exact trip—it was perfect!” All The Pretty Birds: We Love These Wild, Aviary-Inspired Earrings The Best Hotels To Stay At For Your Safari Honeymoon