We love a royal wedding—haven’t you noticed? Royal weddings have been national celebrations for generations. Perhaps it’s the Chantilly lace, the lavish 25-foot trains, or the cascading lily of the valley that evokes an enchanting reimagining of our favorite fairy tale. And amidst all of the pomp and circumstance, there are certain rules that are supposed to be followed. One being that their gown must speak of its time, rather than being timeless.

Some royal brides, however, choose to ignore whatever style is de rigueur. It was Queen Victoria, who in 1840, wore white on her wedding day when color was considered the norm. The world then followed suit and white became convention.

Almost a century later in 1937, Wallis Simpson’s wedding to Prince Edward, the Duke of Windsor, was considered scandalous. Not only because the Duke had abdicated his throne to marry the woman he loved, but because Simpson (an American divorcée) went against grandeur tradition and donned an austere dress and chapeau in “Wallis Blue.” The dress resides in the Costume Institute of the Metropolitan Museum of Art today.

In 1947, Queen Elizabeth II’s couturier Norman Hartnell named Botticelli’s “Primavera” painting as the inspiration for the elaborate embroidered florals on the then-Princess’s ivory satin dress. Later in 1960, Hartnell designed an hourglass ball-gown silhouette with acres of unadorned, white organza for Elizabeth’s sister, Princess Margaret. Vogue dubbed her, “a new princess.” Hartnell was later knighted for his work in creating both gowns.

From Grace Kelly, Princess of Monaco’s magnificent headdress to Lady Diana’s mille feuille, we’ve take a look back at the evolution of royal bridal looks. Lady Elizabeth Bowes-Lyons and King George VI
In 1923, Vogue announced the engagement of Lady Elizabeth Bowes Lyon to His Royal Highness the Duke of York. The couple married just a month later in Westminster Abbey in London. The gown, inspired by Coco Chanel’s unstructured look, was designed by Madame Handley Seymour. The lace of her veil was gifted by the groom’s mother, Queen Mary. King Felipe and Queen Letizia of Spain
Prince Felipe of Spain married Princess Letizia at the Almudena Cathedral in Madrid in 2004. Her gown was designed by Spanish designer Manuel Pertegaz. Prince Joachim and Princess Marie of Denmark
Marie Cavallier married Prince Joachim of Denmark at the Møgeltønder Church in Denmark in 2008. The bride wore an Arasa Morelli design. Written by Rebecca Marin, owner of and event planner at The Wildflowers. 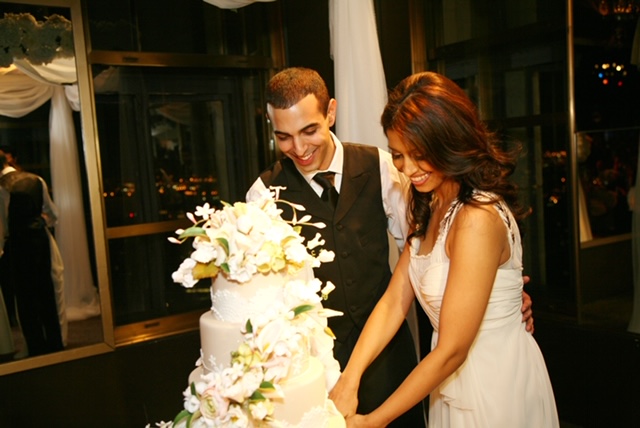 Priya Shukla, SVP of Communications at Vera Wang, Looks Back at Her NYC Wedding