Shelly Bhalla, writer and Jane The Virgin actress,  didn’t expect much when she joined Raya in 2017, and she certainly didn’t expect to find her future husband through the app. But it was love at first “like” for Shelly and television producer Michael Heyerman. Raya allows users to set a montage of their photos to music, and he couldn’t resist “heart”-ing her pictures set to Bon Iver’s “666.” She reciprocated and “heart”-ed Michael’s pictures set to John Parr’s “St. Elmo’s Fire.” He messaged her with an eloquent “hihihihi,” and she replied with a few carefully selected raised brown hand emojis.

On April 7th, 2019, Shelly arrived at brunch in Ojai—only to discover that Michael, with the support of their close friends, planned a fake brunch to lure Shelly in brunch-worthy attire and proposed to her with a rose-gold, emerald-cut ring designed by KC Sukamto. Surprised but elated, she said, “Yes!”

The engaged couple planned their large, Indian-influenced wedding for April 18th, 2020. They visited “a million venues” before arriving at the Hummingbird Nest Ranch in Santa Susana, California. Once they set a date, everything seemed to have fallen into place.

In March 2020, however, COVID-19 sent the country into lock-down. Shelly and Michael postponed their wedding until September. But they realized by the early summer that they could not safely host their large wedding any time soon. “Our families live in different states, and we felt strongly about not hosting an event that could potentially endanger people we love,” Shelly explains. While they knew canceling was the right decision, the couple couldn’t help but feel defeated.

And then, Shelly and Michael concocted a new wedding plan. They would elope! At any other point in time, this might be a fairly simple process, but securing a wedding license in LA County was nearly impossible in 2020. “Courthouses had been closed for months,” Shelly says, “but we figured out a solution and picked the Santa Barbara Courthouse.” Shelly and Michael were warned that the Santa Barbara Courthouse could close at any time, so they kept their elopement clandestine. They only told their families about the impending nuptials the morning-of. Shelly remembers, “They were shocked and thrilled that we could finally make it official.”

On July 29, 2020—the first available date at the courthouse—Shelly and Michael married in an intimate masked ceremony—or, rather, a “bandit-style daytime elopement,” as Shelly describes it.

Shelly already had her original wedding outfits and thought about wearing them. One was an Ayushi Bhasin Indian wedding lehenga; the other, an Amanda James gown. But both were too formal for the courthouse ceremony. With only a week-and-a-half to plan the ceremony and her outfit, Shelly turned to Moda Operandi. “Indian brides usually wear some color for their wedding,” Shelly says. When she saw the lime-green Jonathan Simkhai suit dress, she knew it was the one. Without the luxury of time, she couldn’t get the suit dress tailored, but luckily, she didn’t really need to. The dress paired perfectly with her tan Stella McCartney shoes, a beaded purse from India, and her Etsy mask—of course.

The couple could only bring one guest to the courthouse, so they invited their photographer Jenny Smith to document the day. “Since I could not have loved ones with me that day, each piece of jewelry I wore had a lot of meaning behind it,” Shelly mentions. The gold bangles on her wrists were once her mother’s. Her diamond studs were a wedding gift from her Naini Masi in India. While Shelly was in India, she converted her father’s wedding band into a necklace. She layered this necklace with an emerald Anom Jewelry necklace from her best friend Melanie.

Kelsey Harper of Matriarch designed the bride’s bouquet and flower crown, which featured pink roses in honor of Shelly’s father. “Kelsey Harper is an absolute genius, and we are so lucky she is a friend of ours,” Shelly remarks. “With such little time to plan, I sent her a photo of my outfit, told her that pink roses were meaningful to me and my dad, and let her take it from there. She has the best taste and I trusted her completely.” On the day of the wedding, Violeta Meyners joined Shelly on her porch and applied her makeup.  Shelly asserts, “Violeta is a master at the no-makeup makeup  look.”

Similarly, Michael felt his wedding kurta and tuxedo for their original wedding were too formal for the courthouse ceremony. He donned a green suit by Theory instead, matching his bride in her green ensemble.

Before the ceremony, Shelly felt like a bundle of nerves. She missed her mom and had more to-do items on her checklist than she realized. She had so much to accomplish in such a short amount of time that she had to get ready for the ceremony in the courthouse parking lot. “But by the time we reached the ceremony, the nerves disappeared,” Shelly says.

If Shelly could describe the wedding in one word, it would be “2020.” She recalls how “we had to keep our masks on the entire time–even during the vows! The judge that married us oddly sat behind a clear sheet in a tent that was set up outside on the courthouse lawn.” The ceremony setup was so wonderfully bizarre that Shelly and Michael couldn’t help but laugh.

“Michael had me in hysterics when he kept asking me if it was what I dreamed of since I was a little girl,” Shelly adds. The couple stopped laughing, though, to recite their vows. Despite the 2020-ness of the wedding, both teared up while professing their love and devotion to one another. They were permitted to pull down their masks for a quick kiss. “Like I said,” Shelly muses, “it was so 2020!”

After the ceremony, Shelly pulled out the Milk Bar cake she bought the day before. It traveled to Santa Barbara with them in a cooler! Michael worked on the TV show Lego Masters, and the team customized Lego figures of the newlyweds. The bride topped the cake off with their Lego likenesses.

The newlyweds shared a toast with their family over Zoom. Both sets of families wore the original Indian clothes they had intended to wear to the couple’s larger wedding. The couple had to cancel their original honeymoon to St. Lucia, so they opted for a mini-moon in Santa Barbara at the Belmond El Encanto. Shelly’s family sent flowers and treats to the couple’s hotel room. “It was bittersweet because we are crazy close to our families and missed them terribly,” Shelly says, “but everyone was also elated that we were able to get married–especially my mom!”

“Although there are countless bizarre aspects of eloping during a pandemic, I was so happy that we were finally able to get married,” Shelly says. “We will definitely still have a wedding with our family and friends, but it felt really special to make it official with just the two of us.” 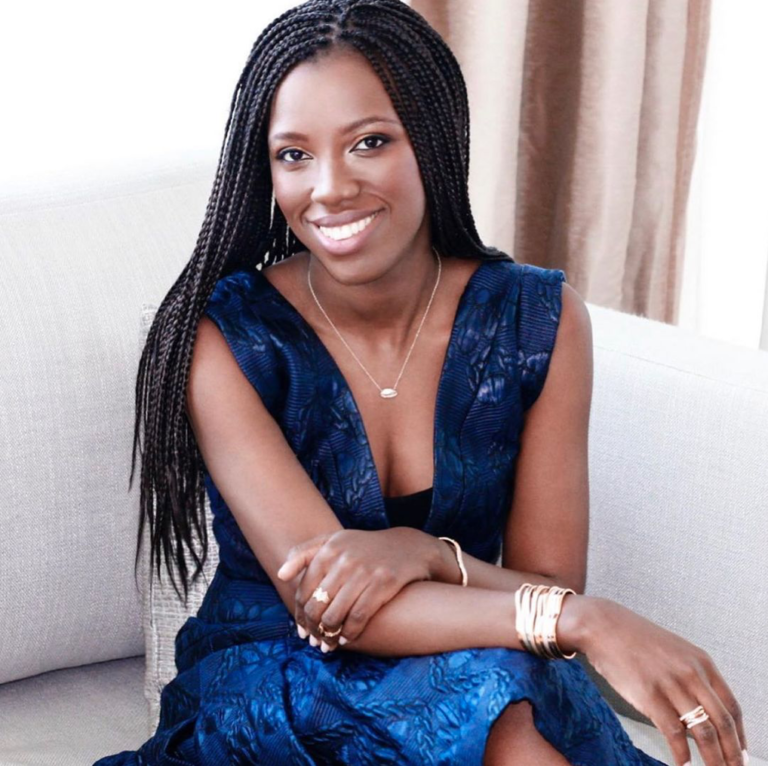 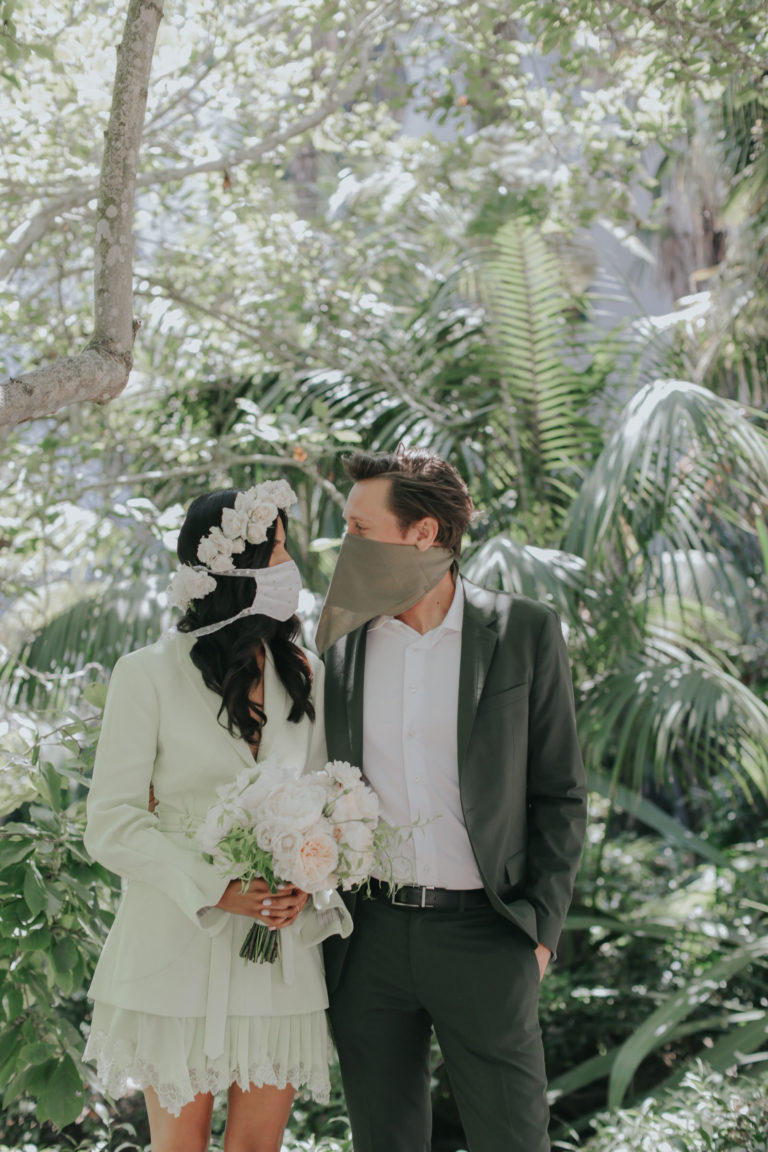 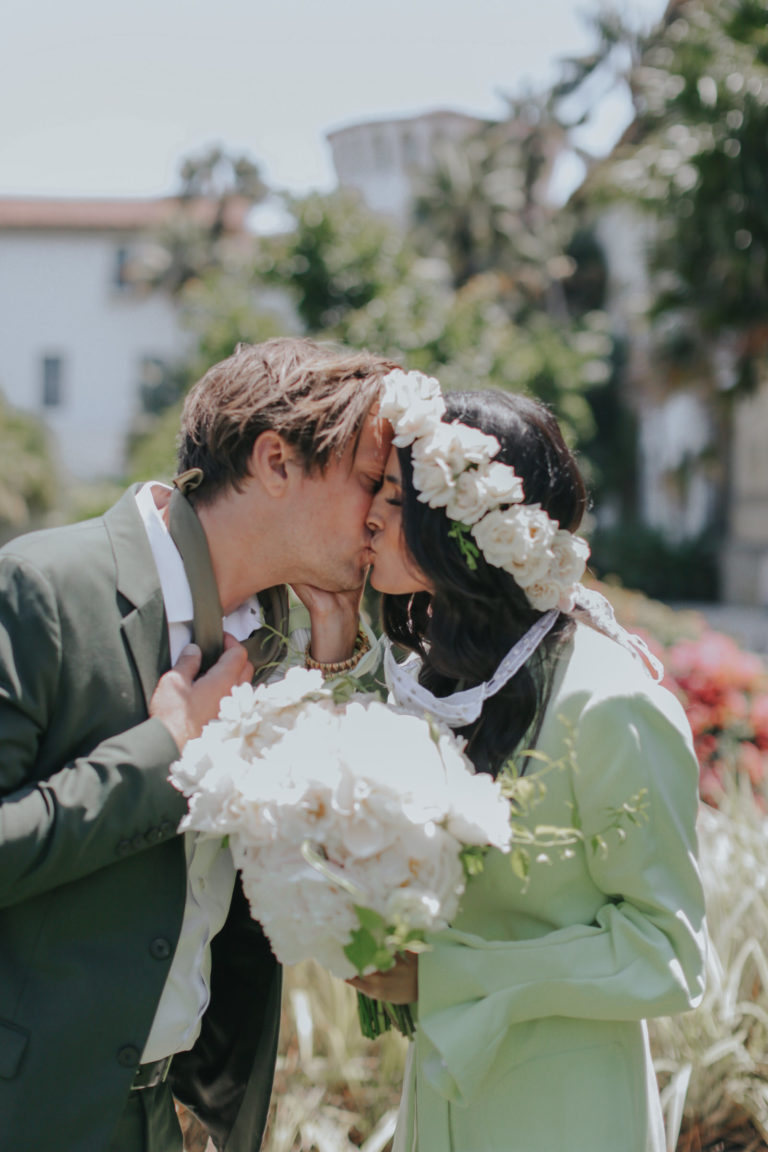 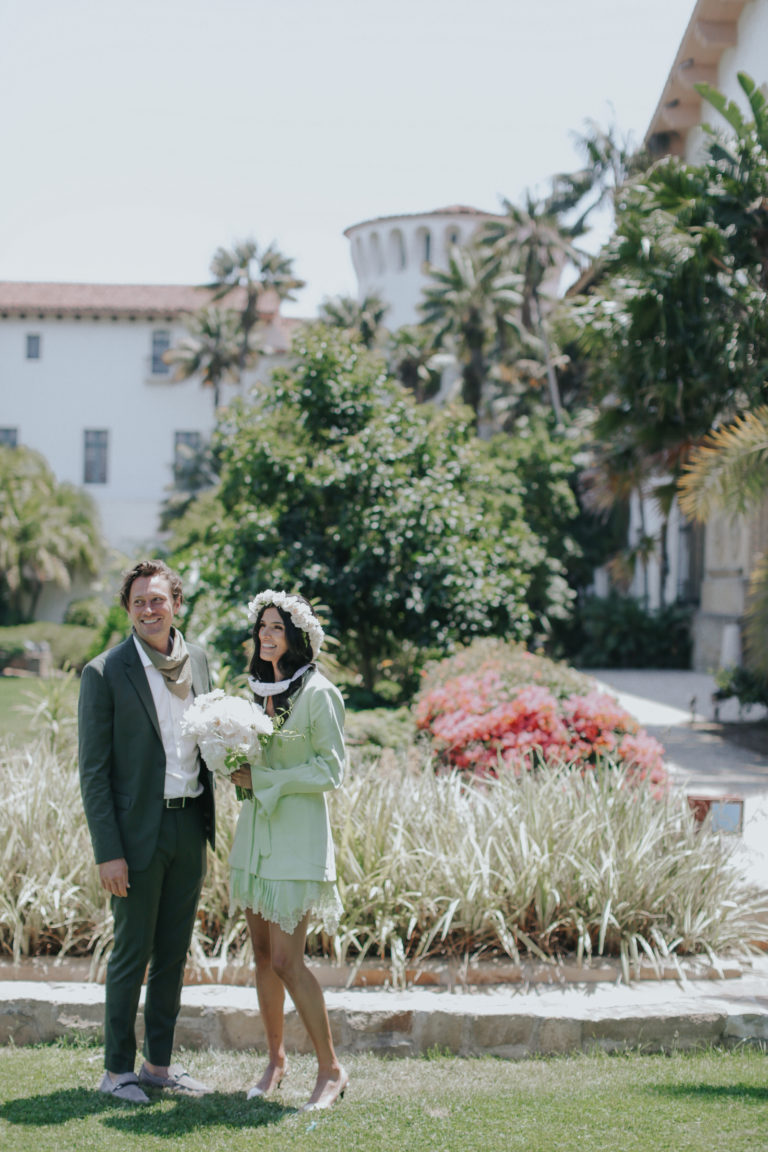 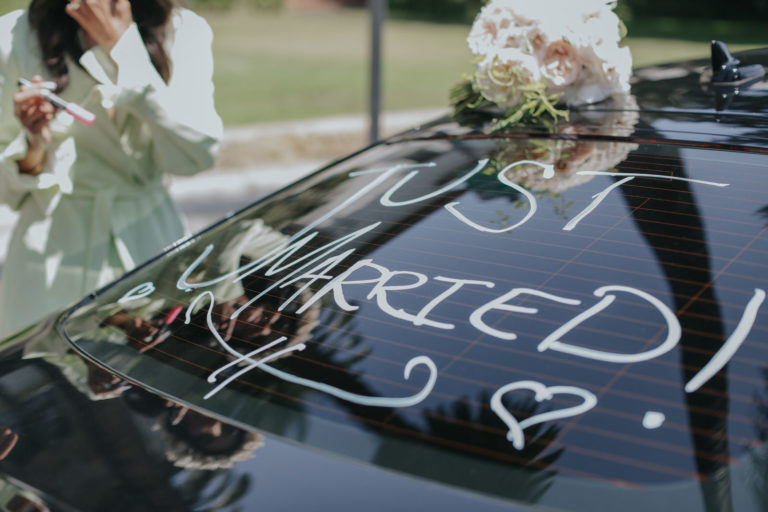 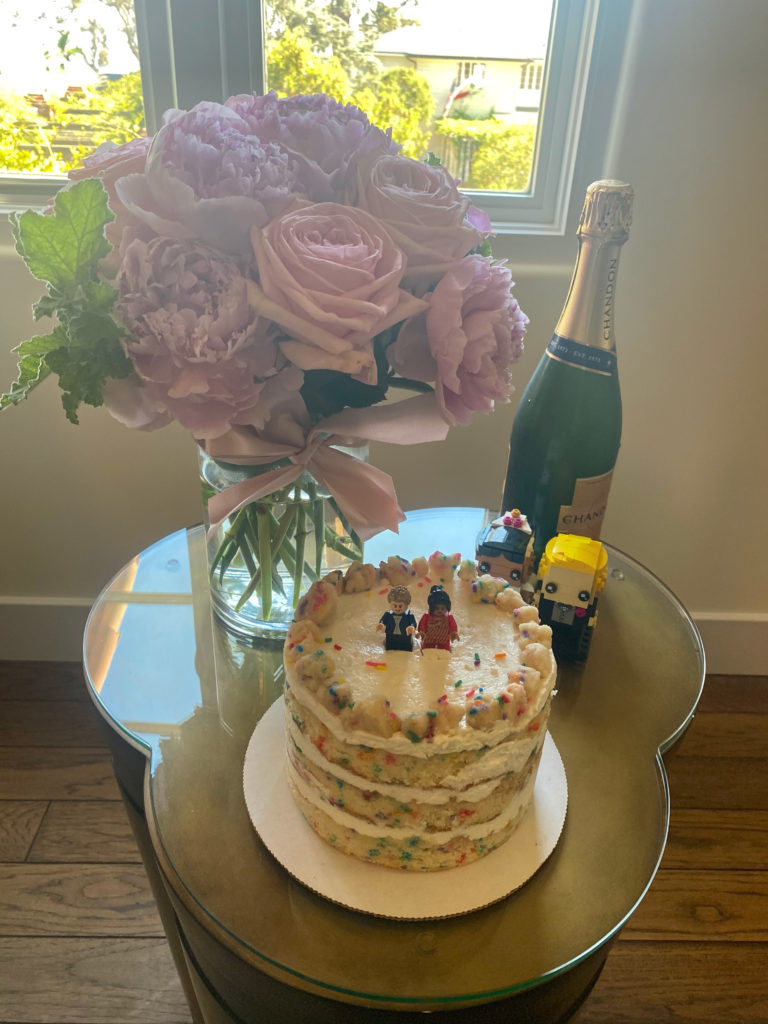