Chances are, you haven’t heard of Consuelo Vanderbilt. Perhaps you know her family name, and maybe you are familiar with her distant descendant, Gloria Vanderbilt, the heiress, fashion designer, and socialite, who also was the subject of a very high-profile child custody case in the 1930s, or Gloria’s son, CNN anchor Anderson Cooper. But over 120 years ago, Consuelo Vanderbilt was the Meghan Markle of her day, as her wedding commanded rapt attention and spurred countless headlines during its lead-up. In other words, Consuelo did it first on November 6, 1895, and it was the wedding event of the year.

Let’s rewind to 1895, when Consuelo Vanderbilt was considered Gilded Age royalty. As the daughter of William Kissam Vanderbilt, Consuelo was worth an estimated $4 billion in today’s equivalent currency. But as an American, Consuelo wasn’t a part of the European aristocracy; there were no titles or tiaras in her world. Her mother, Alva Vanderbilt, was intent on changing that. (Let’s consider her the Kris Jenner of her day.)

At the turn of the century, many of America’s richest young women, known as “dollar princesses” married European aristocrats. It was a win-win situation for everyone involved as the practice guaranteed a title for the wives, while securing the necessary funds for the landed bachelors to revitalize their dwindling inherited fortunes. No other union typified this phenomenon more than that of Consuelo Vanderbilt and Charles Spencer-Churchill, a.k.a. the 9th Duke of Marlborough, and cousin to Winston Churchill, the future British Prime Minister.

Even though Consuelo had secured five proposals from other well to-do European bachelors, she and Spencer-Churchill ultimately became engaged in large part thanks to the machinations of Alva, who had decided the Duke was the best suitor for her daughter. Consuelo, however, was less than happy to be betrothed. It was rumored she was already secretly engaged to an American, Winthrop Rutherford, and only agreed to marry the Duke after her mother blamed Consuelo’s defiance on her declining health—which miraculously recovered in time for the wedding.

On the big day, massive crowds waited outside of New York City’s St. Thomas Church for a glimpse at the glamorous 18-year-old bride. It was reported that once Consuelo arrived (she was tardy) it looked as though she had been crying under her veil. For the ceremony, Consuelo wore a gown of cream satin with a five-foot long train that was trimmed with lace. She wore a veil, as well as a wreath of orange blossoms—which had become popular with British brides after Queen Victoria donned one for her wedding to Prince Albert. For her bouquet, Consuelo carried an enormous assortment of orchids, which had been sent from the groom’s Blenheim estate in England. (As one does when a dollar princess.)

The wedding ceremony, which granted her the title of Duchess of Marlborough, was followed by a reception at the bride’s family’s Upper East Side home. On that day, headlines read, “She Is Now a Duchess,” and “Thousands of Women Besiege the Young Woman’s Home and St. Thomas’s Church.” But in truth, this was the end of a long, press-heavy slog. Alva, the mother of the bride, had been leaking news about the wedding ever since her daughter’s engagement. Everything, including the bride’s reported gold underwear fastenings, had been covered.

The similar degree of attention and detail that was given to Consuelo Vanderbilt’s wedding, can’t help but draw comparisons to the upcoming wedding of Meghan Markle and Prince Harry. However, while Consuelo and the Duke’s arranged marriage ended in divorce—their union was annulled in 1926 after Alva finally conceded she had coerced Consuelo into the marriage—Meghan and Harry appear to be very much besotted, and are marrying each other for love, not titles and fortunes. If only this wedding between an American bride and a British groom could take place on U.S. soil! We’ll just have to dare to dream! We Predict What Meghan Markle Will Wear On Her Wedding Day 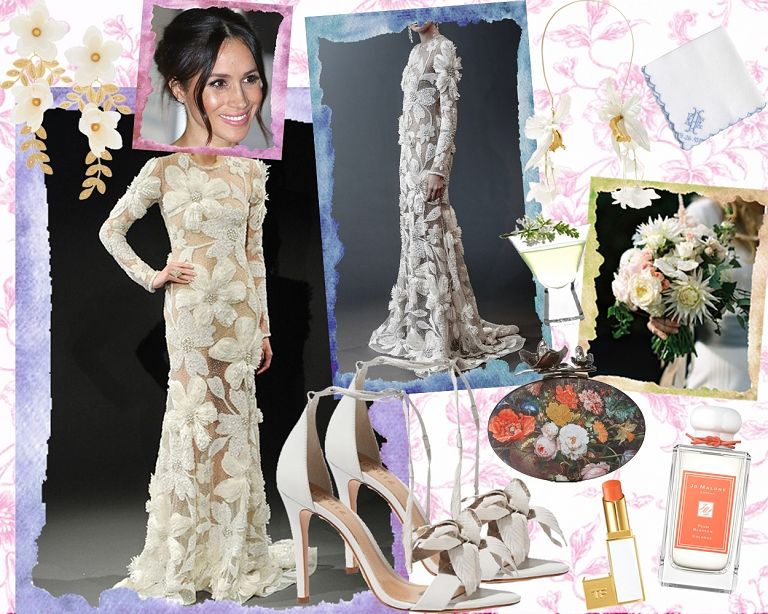